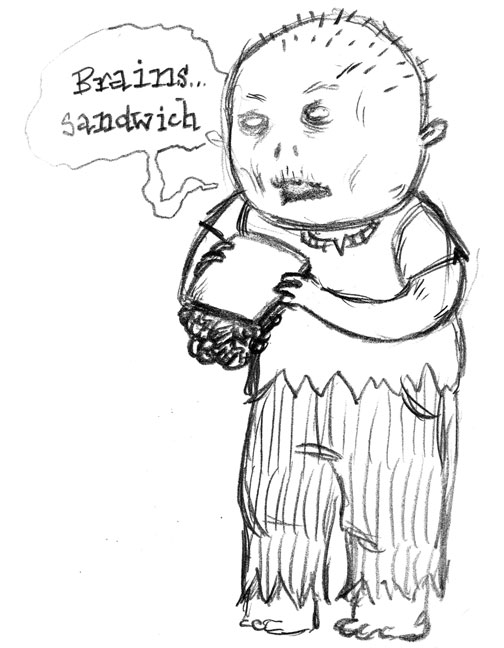 A loud knocking echoed through my home today. Someone was at my door! Who could it be? 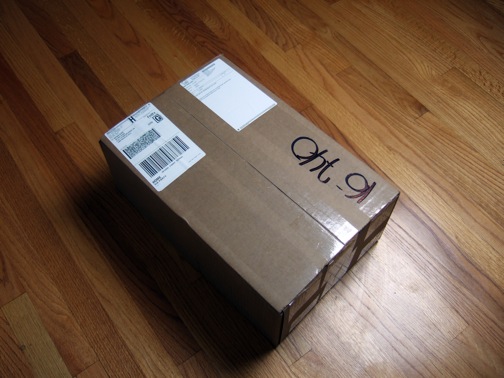 It was the delivery man! And he left this mysterious package — I wonder what’s inside?

Find out after the jump!

Last night, I posted some exciting news and photos to the Haiku Comics Facebook Page. It really means a lot to Bob and I when you guys recommend Haiku Comics to your friends, so we are trying to find ways to reward those of you who have been so kind as to fan us on Facebook and share links to us on your Facebook homepage. It really helps us when you spread the word about the comic — getting people to just take a minute to even look at the site is really the hardest part of building an audience for Haiku Comics. Every little bit helps.

So, please, go take a look at the pictures! And, while you’re there, Bob and I would really appreciate it if you could take a moment to fan Haiku Comics on Facebook and share us with your friends. Thanks everyone!

So what the hell is going on with the above banner? Well, if you will recall a few weeks ago we ran a poll asking for our readers favorite comics. The reason for this was that we were trying to decide which comics to submit to the Cartoon Art Museum for an upcoming display on web comics. Silly museum, they actually liked our submissions and made them a part of their virtual gallery. BWAHAHAHAHA, the infection continues to spread.

Seriously though, it is a very cool thing to have your work accepted as a part of any display. Granted, we are one of about a hundred artists (never thought I’d use that word in the first person) who have comics on display, but it is still cool none-the-less. So, if you happen to be in San Francisco, stop by the Cartoon Art Museum between now and December and see if you can’t catch a glimpse of us. The entrance fee is cheap ($6 US) and they have a lot of very interesting displays.

Have You Taken Our Poll?

Of the following comics, which three do you like the most? (Click on the titles to view the comics.)

Chances are, you looked over the poll and, for whatever reason, thought to yourself, “I know that the guys who make this comic work really hard at it and all they’re asking me to do is answer a simple poll, but there are so many funny cat videos I still need to watch. Hmm. I’m sure there will be plenty of other people who will respond to the poll, right? They don’t really need my input, do they?”

Yeah, well, here is the thing about that. As of this writing, we have only had nine responses to the poll. Nine. Come on, guys, help us out here and give us some feedback. We are a small operation and we need your support. All we want to know is what you think about some comics. So show us some love, okay?

Poll: What Are Your Favorite Comics?

Bob and I would like to ask a favor. It’s not much really, considering that we slave over these comics and give them away to you for nothing. What we would like? Some feedback.

Using the poll that has been included below (RSS feed subscribers may need to view the full post to reply to the poll), we would really appreciate it if you would take a moment to review the comics we have listed and let us know which are your top three favorites. It shouldn’t take very long for you to look through the list, so if you could spare a few seconds to let us know what you think, it would mean a lot to us. It’s sometimes really difficult to know what strips work and what strips don’t without some feedback from our readers.

You will notice that many comics have been excluded from this list. As some of our own favorites have been left off of the list so, most likely, have some of your favorites have been left off of the list as well. There is a reason why these particular comics were chosen for this poll, so please respond in that spirit. Even if none of the comics on this list are your all-time favorites, if you could let us know which three you like the best it would really help.

Thanks a lot everyone!

Of the following comics, which three do you like the most? (Click on the titles to view the comics.)

(Because of caching, poll results may not update in real time.)

So due to some unfounded overconfidence, Nathan and I will be going to the Alternative Press Expo (APE) being held in San Francisco on October 17th and 18th. The APE convention is “One of the country’s most popular and vibrant alternative comics shows”. No really, it’s right there on their website. So, if you are interested in seeing the “talent” behind the comics, feel free to come out and introduce yourself. We are working on having an item or two for sale while we are there, but no promises at this time. Oh yeah, I should probably post this as well APE Comic Convention just in case anyone wants to go check out their site.

Another item of note that I wanted to pass along is that one of our loyal readers J/Metro got Haiku Comics a small blurb in the magazine Rue Morgue. Granted, it is just a small paragraph in their Roadkill section, but it is our first “mainstream” mention of the site that I am aware of. So go check out J/Metro’s and Rue Morgue’s websites in appreciation of their appreciation of our site. (Yeah, I have a hard time reading that sentence also.)

To mark the occasion of our sixty-ninth comic strip, Bob and I decided to take a look at what might have happened if things had turned out a little differently and our roles on Haiku Comics had somehow been reversed. What if, by some terrible twist of fate, I had ended up as the writer of the strip and Bob the artist? The results of that grim imagining can be seen here.

As some of you may have noticed, the website got a massive overhaul this the weekend. While the update is by no means perfect, hopefully you can now show the site to all your friends without shame. Or, at the very least, with less shame. I mean, sure, we’re cranking out the same crude, juvenile humor that has come to define Haiku Comics over the past six month — but the pig’s wearing lipstick now, you know what I’m saying?

Of course, there’s still a lot of fine tuning to be done. We’ve temporarily had to remove the archive pages, for instance (all of the comics are still available if you click through them in the main navigation). We still don’t yet have a proper logo. And the sidebar needs some work. We’ll get to these issues as we have time.

Anyway, Bob and I hope the the redesign is to your liking. It’s definitely an improvement, right? You can let us know what you think in the comments section below.

Yes, believe it or not, today is our 50th strip. In honor of this achievement, because let’s be honest here, who thought we’d still be going at this point, we proudly present the return of Zombie Baby. Both Nathan and I would like to thank all of you who have read and continue to read our little project here. It really is the comments we get from you all that keeps us going. Without you, none of this would happen. So here is to another 50 strips and another return of Zombie Baby.

On a side note, I just want to say that I have the easy half of this partnership. Without Nathan’s skill at drawing, either this wouldn’t be happening or you’d be seeing my badly drawn stick figures. So if you think about it, give him a shout out in the comments and let him know you appreciate all of his hard work.

I am over 18
This website uses cookies to improve your experience. By continuing, you agree to their use.Got it!