The last of the domestic preorders were put into the mail today, so hopefully all U.S. residents who ordered a shirt will be getting theirs soon. International orders will go out on Monday as I need to go to the Post Office to mail those. However for those who haven’t ordered a shirt due to not being sure if they were an actual item, now is your chance. We have them in stock and they are waiting for you. So head on over to the store and pick one up today. More sales = more money = more types of shirts = more mayhem, so it’s a win-win. 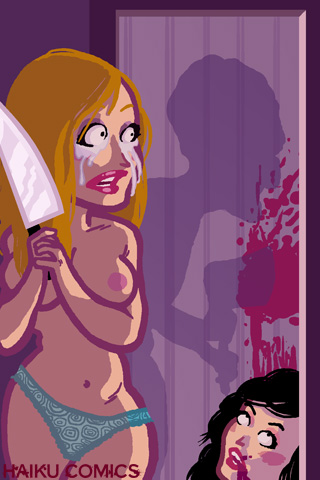 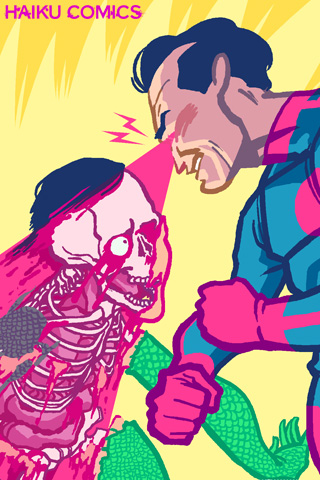 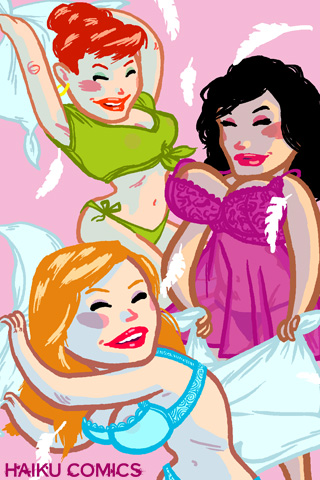 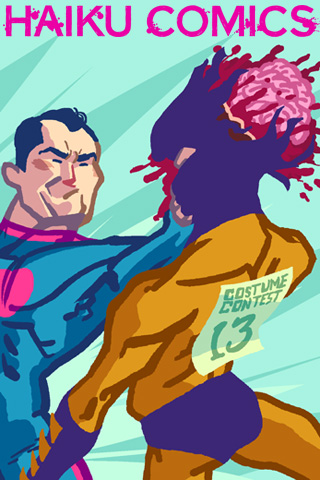 I know some of you have probably been a bit impatient with the comic’s slower schedule these days, but I’ve really been enjoying the opportunity to put in more time on the artwork. I’m really proud of these last few comics and thought it would be fun to turn them into some iPhone wallpapers. Enjoy!

Jack Carter of Webcomic Asylum has posted a review of Haiku Comics. In the review, Mr. Carter says Haiku Comics is “something pretty unique and a fresh take on horror” and rated us 8 monkeys in his starred review, which I’m pretty sure is a good thing. He also says that “the stylized violence and over the top gore add to the [comic’s] charm” and that “when combined with poetry, it’s pretty different, in a sick and twisted way. Cool.”

Unfortunately, Mr. Carter only gave the strip’s writing a seven, which sent my brother into donning an astronaut diaper and tearing off in his truck towards Mr. Carter’s residence. We’ll have to see how that one turns out.

On a more serious note, we’re always very appreciative of press and reviews — anything to help get the word out. Thanks, Jack!

Your sister, Jeanyce, bought you a copy of our book for your birthday. Unfortunately, it’s going to be late. This is why.

I’ve got to say, my brother writes pretty good haiku for a zombie.