Bob and I have started up a fan page for Haiku Comics on Facebook. If you use the service and would like to let all of your friends know that you’re a fan of the strip, you can do so here.

Update: Just to clarify, there isn’t really any point to this. We don’t have any plans to do anything in particular with the Facebook page. It isn’t meant to be one of those stupid apps that starts sending out virtual-hamsters to your friends and you certainly will not start getting spammed for fanning Haiku Comics. I wouldn’t even rely on it for news updates — those are best found here on the site. It’s just a way that you can help us spread the word about the comic. Thanks!

Look, we all know this house’s history, right? It’s just a matter of time before one of our young protagonists bites the dust, so I thought it might be fun to give you all the chance to guess the house’s first victim. Julie has already thrown down the gauntlet in the comments section for today’s comic — she thinks it will be the quarterback. Think she’s got it all wrong? Click on the poll below to add your two cents.

The Dare II: Who Dies First?

If you really want to make things interesting? Leave a comment and tell us who dies second, third, fourth and — well, do you think anyone will make it out alive? Get them all right and you’ll be our new best friend come football season.

One of the many benefits that’s come from agreeing to collaborate with my brother on Haiku Comics is that I’ve been learning a lot about the web comics scene which, really, might more accurately be called a movement. After all, the directory, Online Comics, currently lists 7,754 web comics in its database — that’s about 7,740 more web comics than I even knew existed just a few months ago. Frankly, as someone who was an avid collector of mini-comix in the nineties and has been a lifelong reader of comic books and newspaper strips, I am somewhat ashamed to admit the extent of my ignorance in this area. Especially since, you know, I now draw a web comic.

There are a few strips that I have been following for quite some time, many of which you all are no doubt already aware: Penny Arcade, The Perry Bible Fellowship, Questionable Content, and Freak Angels. And if you haven’t had a look at them you probably should — they are the Thimble Theatres and Gasoline Alleys of our era. However, as great as those strips are, what I’ve come to more recently discover is that they are merely the tip of the proverbial iceberg when it comes to web comics. There is so much more to see. So, I thought I might share with you some of my finds.

One of my favorite new discoveries is Pictures for Sad Children by John Campbell. Campbell recently did a hilarious pair of strips that were supposedly sponsored by the fast food chain, Long John Silvers. You can see part one here. And here is part two. I am envious of the site redesign that Campbell created to accompany the strips — the whole thing is brilliantly executed. I am also quite taken with this strip, although it is the work of guest artist, KC Green.

Speaking of KC Green, his gag strip Gun Show is well worth your time. The more recent strips aren’t as accessible, but there is some great material in the archives. The comic appears to have started in September 2008 and I think it’s pretty amazing how far Green has developed such a short amount of time. It just proves the point that the best way to get better at anything is through continued practice. It’s certainly paid off for Green.

While I don’t know that it qualifies as a proper web comic, Lucy Knisley has been posting strips to her Live Journal account pretty regularly. My sense of humor generally tends to gravitate towards darker material, but I’ve really been enjoying the work she’s been putting up. And, hey, if you need zombies in your comics, she did draw this.

Yuko Ota and Anantha Panagariya have a comic going called Johnny Wander that has some potential. Ota is also responsible for a slightly more famous web comic, Fallen.

We The Robots by Chris Harding hasn’t been on a regular publishing schedule for a while, but what is already in the archives is definitely worth your time. The same can be said for Butternut Squash by Ramon Perez and Rob Coughler. And The Bean Men by Sean Tenhoff.

There’s just a lot of great work out there. If you know of any great strips that I’ve missed, please leave a comment and let me know about it. I am a huge comics fan and I am always looking for new stuff to read.

Before I go, I would be remise if I didn’t take a moment to thank all of you for your continued support of Haiku Comics. I especially appreciate those of you who have taken the time to leave comments for us on the site — your vocal encouragement is the fuel that keeps Bob and I going. In addition, I would like to thank Jonny Metro of Midnite Media and Victoria Gadson of Geekery Under The World, who have both been generously promoting Haiku Comics on their own websites. Your efforts have not gone unnoticed and are very much appreciated. Bob and I really enjoy making this comic and having such a wonderful audience with whom to share our efforts has just been icing on the cake.

OK, no, I am not drawing anything, so you are safe from that horror. However the comics for the 25th and the 27th have had a slight role reversal. Instead of Nathan creating the drawings from my haikus, I created the haikus based on his drawings. It was definately an interesting switch from my perspective trying to create a story that went with the drawing instead of the other way around. I personally really like how they turned out, but of course it is up to you dear readers to decide that for yourself.

A Question For Our Readers

So, as I look through the options on our site, I realize that I have no idea what so ever on how to post a poll. Therefore, it is up to you dear readers to leave a comment on this thread. Now that we have run a fairly long storyline and multiple one shot comics, we have a question for you:

Which do you prefer to read?

So, there you go. Please leave a comment and let us know what you think. I don’t promise anything, but hey maybe you will feel like you have some control.

So, as you or may not know, we have one fan who is insane. We love her, but she’s crazy. As in, she got a tattoo of one of the comic panels on her leg. Recognizing this insanity and its place in the universe, today’s comic is a small thank you. Now, don’t think that getting a tattoo will get you into the comic, although it couldn’t hurt. This was a one time thing as a thank you to Julie who has been following us since day two or three :) 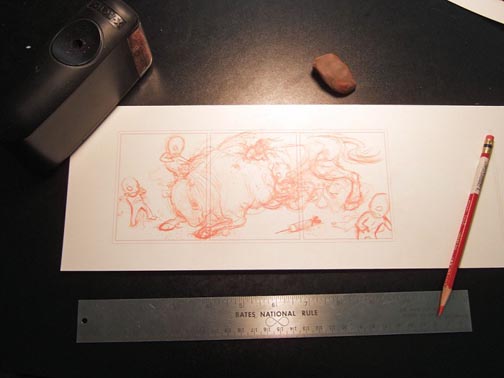 I thought I’d give everyone a little peek at what the comic looks like before I ink it. I print panel guides onto a sheet of 2-ply bristol board and then pencil with a vermillion Col-Erase. (I find the light orange color easiest to remove in Photoshop.) Inking is done with Prismacolor Fine Line Markers and I use a Pilot G-2 for lettering.

So, that’s it. Our four week epic, Dead Man’s Party, has reached its grim conclusion. If you ask me, that guy had it coming. I mean, sure, he handled the zombie okay but who goes on a date and doesn’t take a moment to check their companion’s reflection in the side mirror of their car or, if they are on foot, in a darkened shop window? You just never know with people these days. Me? I don’t leave the house without a clove of garlic in my pocket and a wooden stake duct taped to my ankle. Safety first.

We have started to see a steady increase in traffic to the site over the past week, which is really gratifying. Thank you all for stopping by and giving our little project a chance. My brother and I are just starting to get a feel for what we’re doing here, so I hope that you all will stick with us for a bit and give us the opportunity to prove ourselves worthy of your adoration. The best is yet to come.

(No, really, it is. You should see Wednesday’s comic. It is totally rad.)

I have tried to write this post about five times now and I just don’t know where to begin. I am flattered. I am proud. And I am deeply ashamed that my lousy drawing is now permanently etched on your skin. You have no idea what this is going to cost me in therapy.

Julie, you are awesome.

Welcome From The Other Half

I suppose it’s time that I spoke up around here. :)

I want to thank everyone who comes to this site to see what Nathan and I are doing.  I have a lot of fun thinking up different haikus, especially in the current story line, but none of this would be possible if Nathan didn’t have the ability to draw it all out.  It’s great seeing a haiku drawn out and seeing how someone else interprets your thoughts.  While we seem to be thinking the same thing 95% of the time, its that 5% that makes each comic a joy to see for the first time once it has been drawn.

As Nathan said, while zombies may be taking up a lot of space on the site right now, fear not as other creatures will be showing up in the future.  Heck, who knows, maybe we’ll even come up with something that isn’t morbid some day.  I wouldn’t hold your breath, but it’s always possible.  So have fun, ready the comics, and enjoy the site.

Oh yeah, I think this pushes Nathan’s welcome message off the page. So click back and see what he has to say.