After a year of maintaining a ridiculously aggressive publishing schedule, Haiku Comics is going to be cutting back on the number of comics it publishes in 2010.

What? Haiku Comics won’t be publishing a new comic strip every Monday, Wednesday and Friday in 2010?

Read all about the changes to Haiku Comics schedule after the jump.

One year ago today, my brother took an idea I had and got it up and running faster than I thought was possible. Three panels and 17 syllables later haikucomics.com was another stop on the Internet highway. In those early days the sky was the limit and it was obvious that nothing would constrain our combined geniuses. Of course we had no idea just what we had created or how it would turn out, but we knew that A) we were funny as hell and B) we were twisted as hell.

In the upcoming year there will be some changes to Haiku Comics. We have come to learn what we can do, what we can’t do, and what we are able to do and stay sane. Some of these changes will be good, while others will be just that, changes. It is important to know that no matter what changes you see, both Nathan and I are committed to keeping Haiku Comics up and running. Or was that should be committed? Either way, Haiku Comics is not going away.

In the past year we have posted over 150 comics, created a book containing our first 100 comics, a coffee mug, gone to our first convention, started an online store, paid taxes, had a reader get a tattoo of Zombie Baby on their leg (Julie), and generally lost money. But, we have been doing something that we both enjoy, have stayed in touch more in the past year than the previous 10 years, and have come to enjoy bantering with our readers on the site.

So, on that last, sickly sweat note, I leave you now with those famous last word uttered by Socrates … I drank what?

With  the end of the year approaching, I though now might be as good a time as any to catch everyone up on what web comics I’ve been reading lately. Can you believe that it’s been eight months since the last time I did this?

First off, if you’re not following Kristian Nygård’s Optipess, you’ve been missing out. I think the strip has a lot in common with Haiku Comics, both in the way the strips use action to tell a joke and in the frequent misfortune that befalls the characters. This is one of my favorites. And, according to Kristian, this strip was inspired by the Haiku Comics book. Kristian isn’t afraid to experiment with his comic and I’m really looking forward to seeing what he does with it in 2010.

Apparently, Neil Swaab’s Rehabilitating Mr. Wiggles can be found in newspapers, so I’m kind of bummed that I’ve just discovered it. Neil recently wrapped up a storyline that involved Mr. Wiggles, a stuffed bear, becoming God. In case you were wondering, this turned out to be a bad idea.

Moe by Michael Firman has given me more than one good belly laugh. I don’t know what exactly Moe is, but I’m not sure he should have been allowed to breed. But any comic that has a character named Cement Bag Head is okay with me. 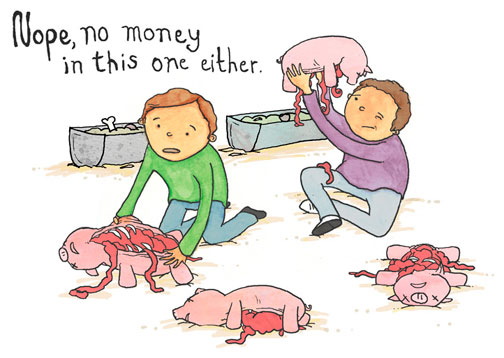 Edgar R. McHerly’s Invisible Hair Suit is just strange. But it’s the kind of strange I find irresistible and hilarious. I really, really want Edgar to make a lot more of these.

If you are an adult and enjoy sexual humor, you should be reading Trudy Cooper’s Oglaf. It is ridiculously pornographic, however, so it’s probably not the best choice for passing the time at work. The strip is set in a fantasy sword-and-sorcery-type world, which often results in jokes like this one and this one. In case you were wondering, not all of the jokes are pornographic, just 99% of them. You’ve been warned. 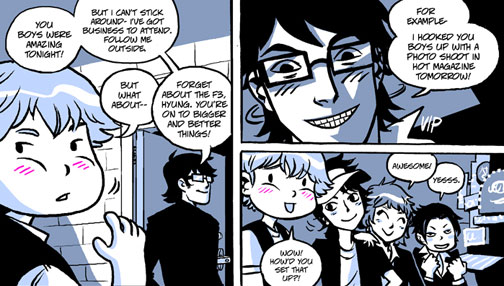 At the complete opposite end of the spectrum is Becky Cloonan & Hwan Cho’s KGB. KGB is a serialized graphic novel about a Korean pop band. I’m undecided about the story — the characters are a bit weak at this point — but the artwork is gorgeous. Cloonan and Cho are a talented pair, so I’m really looking forward to seeing where they take this.

Whew! That’s a lot of comics. If you get through all of those, you might take a look at Atomic Laundromat by Armando Valenzuela, Fantasty by Lauren R. Hale, Woody After Hours by Ben Carter and Paul Westover, and Borked Planet by Jess Warren — who all have been kind enough to throw their support behind Haiku Comics over the past year.

Thanks to everyone for such a great year. Here’s to 2010! Happy new year!

Since the last set of iPhone wallpapers were well received, I decided to throw together a new set. Enjoy!

So, there has been some issues where Internet Explorer is showing the navigation bar under the comic as messed up. Well, it’s your fault. No, really, all your fault. See while Nathan changed the bar, the fact is that you, again, yes YOU, have your browser set to use cached information. Oh sure, this let’s the page load faster, but it means that it is using the old CSS information. (It’s OK if you don’t know what CSS stands for, we won’t make fun of you.) So, in order for the bar to show correctly I want you to do something for me … hit your F5 button. “But Robert, I don’t have an F5 button on my keyboard!” I hear you saying. That’s OK, just hit the refresh button in your browser and VOILA! instantly fixed navigation bar.

Also Nathan added a ‘Share’ button to help people spread the word about our little site, so click it :p

The Holiday’s Are Approaching…

Just a reminder: Haiku Comics can sell you things that you can wrap in colored paper and give to other people.

Or, that you could even give to yourself, if you could set aside all of that self-loathing long enough to complete the transaction. Who knows?

But, really, who wouldn’t be overjoyed to find one of these in their stocking? I mean, if this world needs more of anything, it’s more zombie baby.

And if it helps keep Haiku Comics running, that’s a good thing too, right? 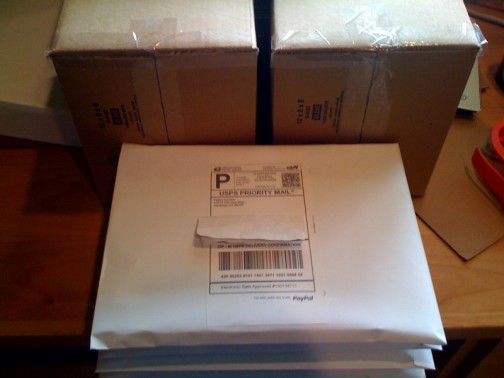 OK, so everyone has used that line since The Dark Knight came out, but sometimes it just works. The reason I am “so serious” is that I wanted to take this time to thank everyone who has purchased a book, mug, or some combination of the two so far. I especially want to thank their patience as we get this whole store thing worked out. That being the case, I have just finished packaging and printing out shipping labels for our current orders. OK, there is one that still has payment pending, but we still love you and will get your shipment out as soon as it clears :) So, on Monday, all of the nice packages above will be brought to our local post office, dropped off in the mail, and sail happily along to show up at your doorstep. Of course, the poor packages have no idea what perverted and sick things our readers will be doing to them, but hey, whatever goes on in the privacy of your own home is fine by us. So once again, thank you for your patience and your continued support of our site. Nathan and I do this because it’s fun, not to become rich. Although we wouldn’t mind becoming rich :)

Update
All orders where payment has been confirmed, including International orders were shipped today. Once again, thank you for your patience.

Yes, the above haiku is true. The long awaited, never duplicated, Haiku Comics Store is now open. In it you can buy books, coffee mugs, t-shirts, alien spaceships, and much, much more!

So there you have it. Right now you can buy the first 100 strips in book form and our very own Baby Zombie on a coffee mug. We do have plans to expand our wares in the near future. All we ask is that you have a little patience as we iron out the bugs. Currently we are getting all of the shipping supplies put together and hope to start sending out the first products by the end of this week. Until the link is put on the site, here is the link to the store if you want to check it out: http://store.haikucomics.com/

Well, it’s just after 5am here and before I call it a night, I wanted to mention that Bob and I compiled a list of our favorite horror movies which was published the other day over at Midnite Media. Jonny Metro asked us to put together a top ten list but, in an effort to one up everyone else, we decided to make it our top eleven. Nigel would be proud.

In other news, prints of a few of my illustrations can now be purchased online. For those wondering when Haiku Comics merchandise will be made available for sale, we should have some news on that front very soon.

Have a great weekend everyone!

I don’t know why I didn’t think of it sooner, but I realized yesterday that the comic panels in Haiku Comics are ideal for creating iPhone wallpapers. I’ve wanted to create some Haiku Comics desktop backgrounds for a long time, but I’ve been a bit perplexed as to how that would work. But iPhone wallpapers? No sweat!

After spending a little time digging through the archives, I picked out a couple of images that I thought would look good on the iPhone. I showed them to Bob and he gave his approval so, here you go — Haiku Comics first official set of iPhone wallpapers!

Are there any other images you’d like to see turned into iPhone wallpapers? Let me know and I’ll consider them for the next set.

I am over 18
This website uses cookies to improve your experience. By continuing, you agree to their use.Got it!